At about 3.5 weeks, I salvaged a single yellow mini bell seedling from the Aerogarden and put it in a pot to grow. I would have preferred an extra red pepper plant, but couldn't extract those spares without killing roots.

The pot is a Walmart self-watering plant spa. I used Miracle Grow potting mix (what I had), and put a little pile of bloom food in the corner for it to partake of when and if it wanted. And put it outside in the summer sun. 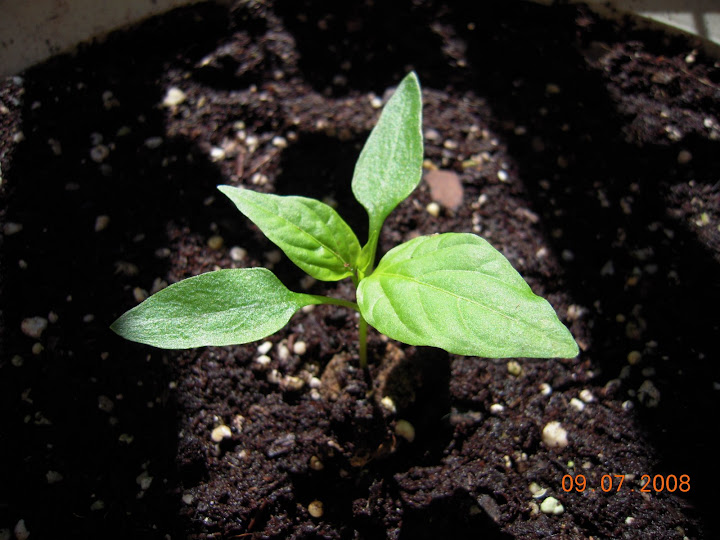 And the Pro100 plants at the same time. The yellow pepper is in the middle. 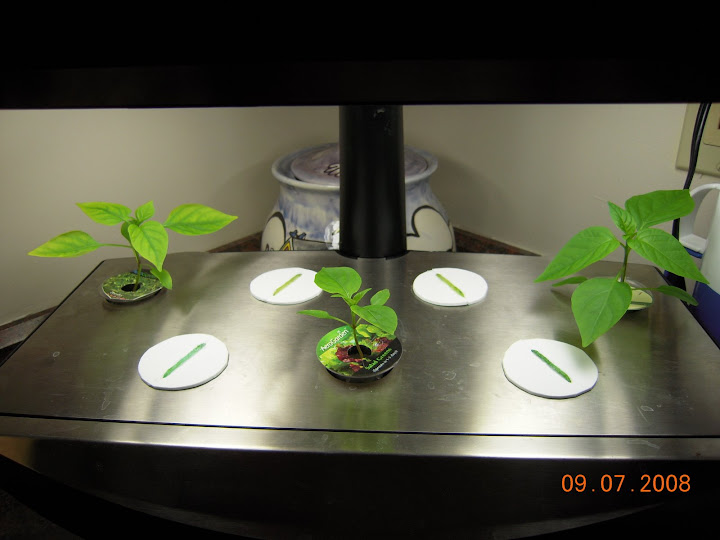 (I won't post any more pictures of the Pro100 plants on this page.) 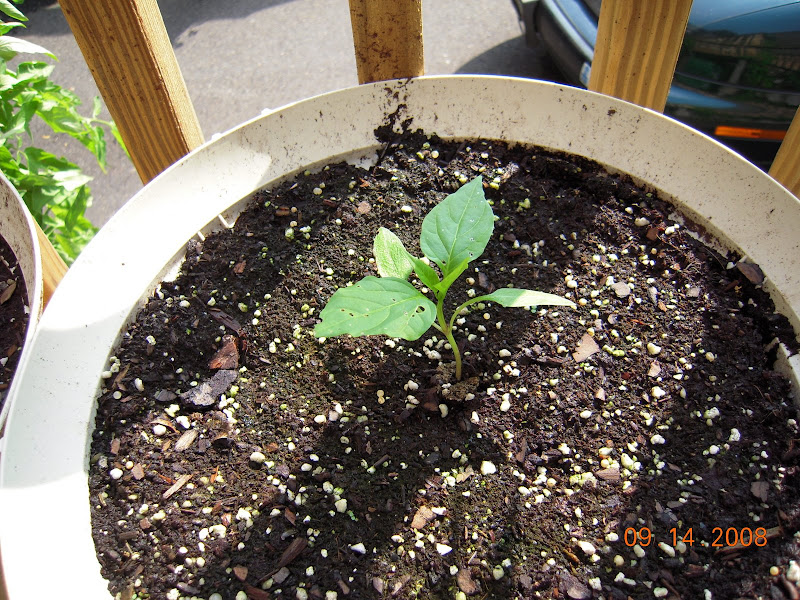 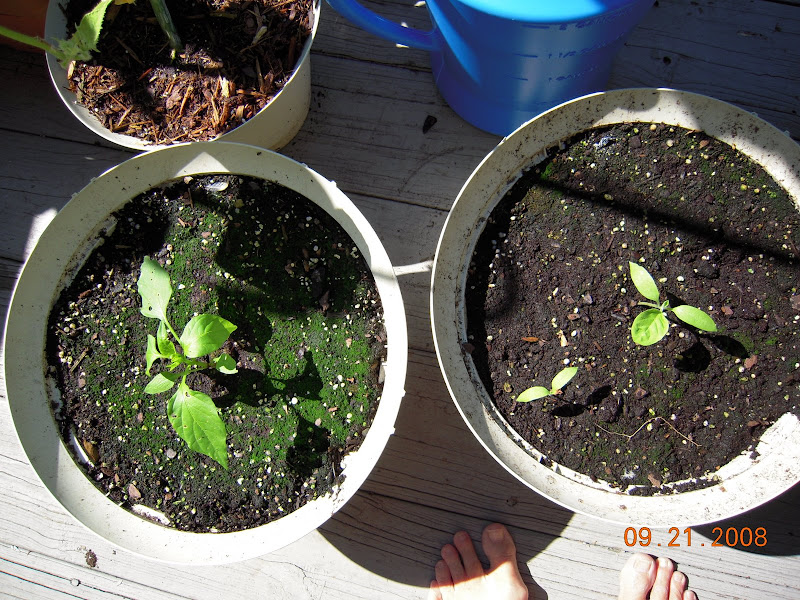 The plant to the right is an eggplant (Eggplant Twinkle, Park Seed)  in a twin pot. I started the bigger eggplant seedling two weeks later than the peppers, in Park Starts (the smaller was a week later still). The idea here was to explore varieties I could grow in an Aerogarden, but I do love growing lettuce, so it's hard to wait for the longer-to-harvest stuff... But - August was way too late to grow these outdoors to harvest size.

Age 6.5 weeks: we have buds! The soil's rather sodden, and bugs have been at them, but basically a happy pepper plant. 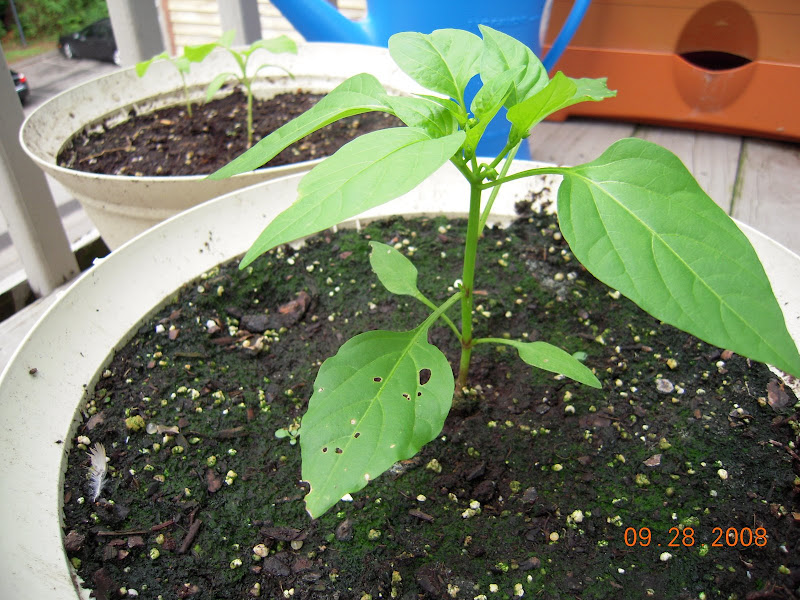 Age 7.5 weeks: stuck indoors mostly now, where it can't get enough light. I've read peppers drop all blossoms below 60 degrees, and by this point, 60's are afternoon highs, some days. This is a west-facing slider door. Pretty cold in deep winter, too, because that bit of floor hangs out above another deck - no heat underneath. But it's not below 60 degrees right there in autumn.

I've never pruned this plant. No need, and from what I've read, not much point in pruning a pepper unless it has space constraints. 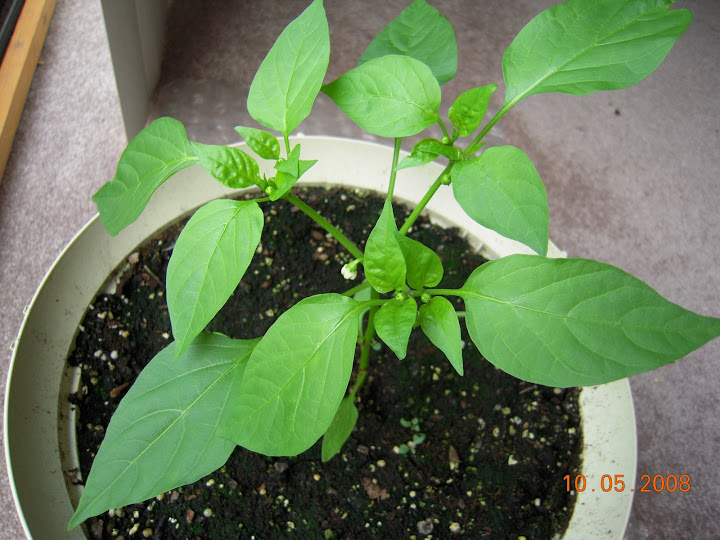 Age 8.5 weeks: on a rare visit outdoors. The little eggplant is still hanging out with it. I left the eggplant living outdoors longer than the pepper, as it had no buds to drop. Notice pepper now flowering. 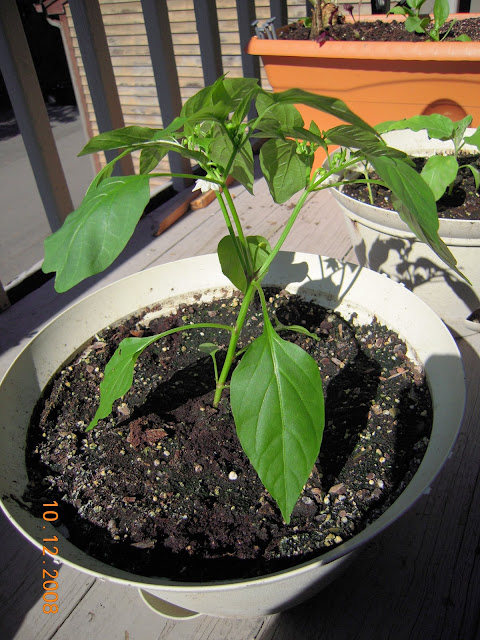 Age 9.5 weeks: moved indoors nearly full time now, rarely stays above 60 long in the afternoon. Using reflective blanket to try to capture more light from the western window-door. It may have set fruit by this point, hard to tell. After the blossoms fall off, you can see a little bump of baby pepper, but then often the flower stalk falls off anyway. So can't tell that it really took until the bump keeps growing. 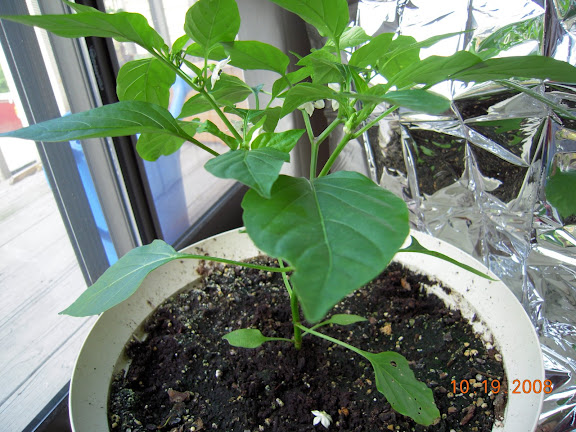 And his little eggplant friend moved indoors, too. Alas, it had powdery mildew on its leaves - one of the reasons he stayed outside. Fortunately Peat turned me on to using a dilute hydrogen peroxide misting on its leaves, which seems to be controlling the powdery mildew. 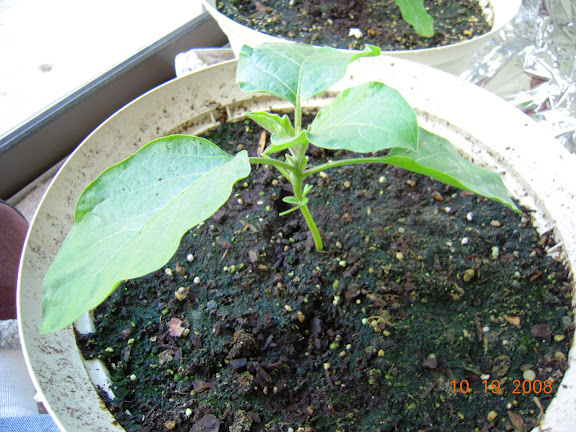 10.5 weeks. Can barely see in this picture, but already a few peppers took. 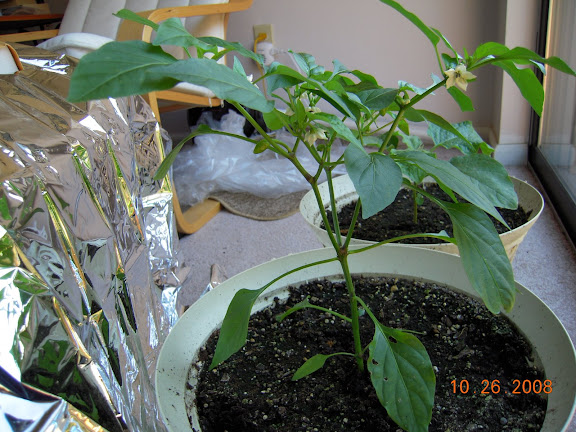 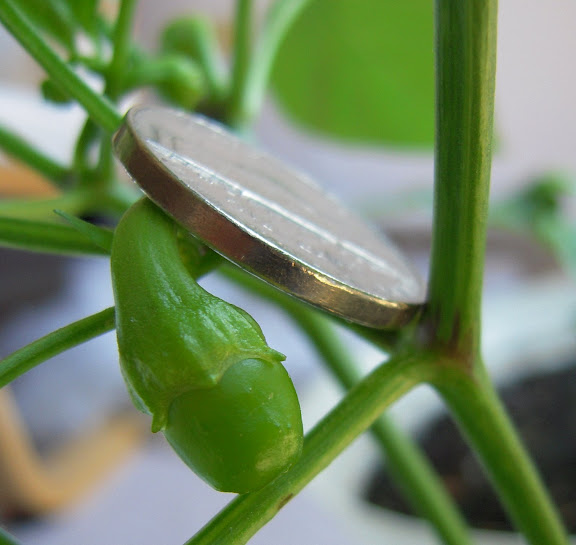 And his little eggplant friend, mostly cured of powdery mildew: 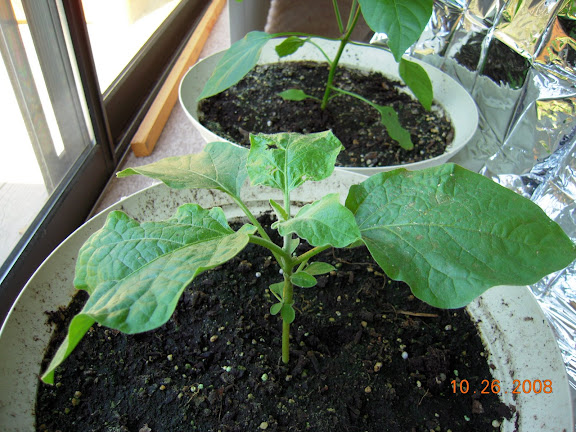 11.5 weeks: Three peppers set! Not four... And it seems to be slowing down. I gave up on the eggplant. It developed an aphid infestation, and even though I doused it with detergent solution to kill aphids, I didn't really want to bring it back inside. 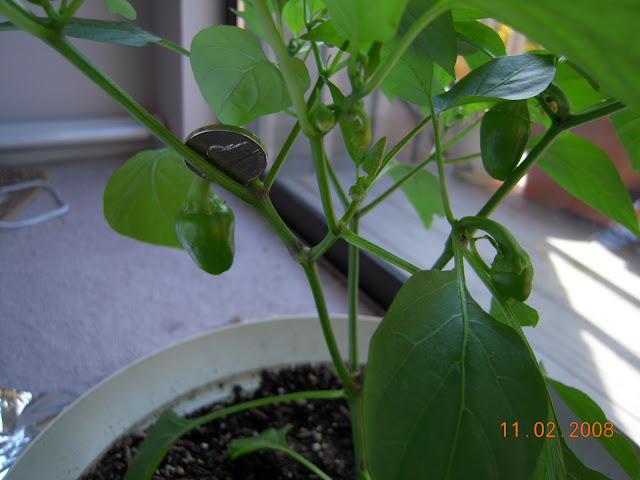 Runty pepper's last photo op before it was terminated for non-production:

I'm still cogitating on what to do about my sliders. Unfortunately, they both open onto upstairs decks, and sealing them off and putting them out of commission for 5-6 months doesn't work for me... But especially the one to my bedroom balcony is cold.

Even the lettuces didn't like it by that window, once the wind picked up and night temps fell into the 20's.

Great idea! We've got a double sliding glass door that could use something like that, that room is always chillier than the rest of the house. Thanks!

Shrinkwrapped windows = window insulation kits. Put double-sided tape all around the window frame inside, then stick a plastic sheet to it, kind of like a thin plastic storm window inside.

Ate the one remaining pepper and tossed the plant this evening. Not an especially good tasting pepper, but not horrible. No seeds saved. I wouldn't grow these again, and the seeds were likely immature, anyway. Will post pix tomorrow on the continuing growlog.

Yeah... Well, I dunno if lettuce will grow there, but the runty pepper isn't.

Worth a try... I just shrinkwrapped the windows for winter, so hopefully that spot will be a tad warmer now. My office too... < fingers crossed >

Bummer... It's been a thorn in your side anyway so use the space to grow something less aggravating. Lettuce would work there, huh?

Hm. This plant had only 2 peppers left on it, and the smaller one (about 1/2" long) just fell off. Has flowers, none setting fruit.

I'm thinking this plant is a waste of space...

13.5 weeks: Regular weekly photo opp. Has flowers, no new fruit, soggy soil drying... I dunno how much longer I'm going to keep this plant, since I didn't like the spicy blackening fruit. And its productivity level already got its litter mate ko'd.