Other members had mentioned this, but I'd never tried it until today :  using shiny emergency blanket material around the AG to reflect light back onto the plants. I decided to try it, not for the AG's per se, but to try to make the most of my western exposure sliding glass door in my bedroom, to see if my potted pepper might eek out a life indoors. I hadn't realized how cheap these things were... $2.29 for a Coleman emergency blanket at Target, for a 50x83 inch sheet - lots!

I also hadn't realized, that though these things are great reflectors, they're see-through! How kewl! So though I shrouded the AG's with them, the AG's still work as glowing lights!

Peppers (Pro100) shrouded, to try to get the middle plant and lower branches to catch up. I poked some air/heat holes in the blanket after I took this picture, and the back flap is separate from the front-and-sides sheet, so hopefully it has enough ventilation. 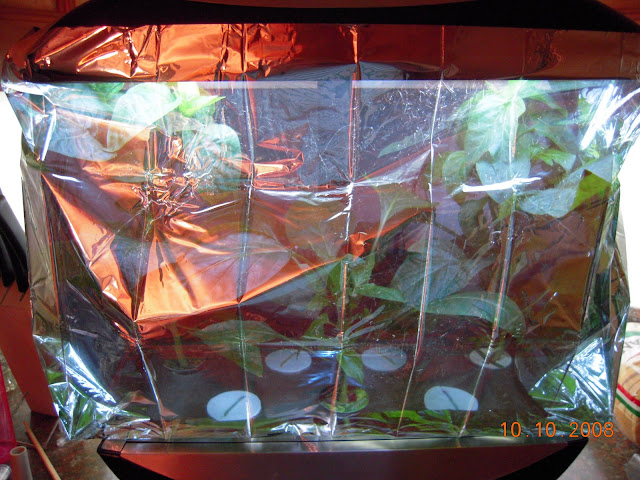 My minis got more of an anti-glare treatment, to keep the lights from shining down into my eyes. (The minis sit on a bookcase above my desk.) This is after I'd experimented a bit to get them the way I wanted them.

The left mini is starting a new greens/lettuce garden. The right is snapdragons and coleus. 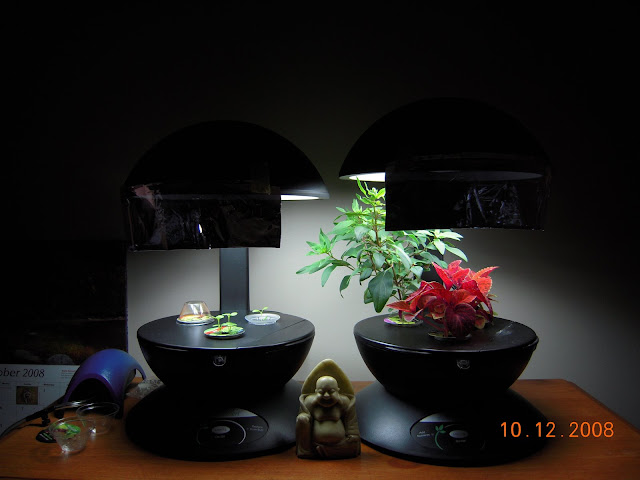 By a week later, I took the all-sides draping off my pepper plants, because I think the heat was getting to them, and maybe the lack of air circulation. Symptoms: the smallest plant was getting curly topped - new leaves all really badly crumpled, and the stems of those growing bits were all staying crumpled together, too, instead of extending up. I tried removing only the side drapes first, but it was after I removed the drape from the front that the pepper seemed to finally remember where up was. Actually - that may have been the problem. With light coming more from the drape than the above lights (that is why I put the drape there...), it lost its sense of direction?

No question that they got more light with the drapes, and responded to the having more light... I left the one reflective drape hanging behind the unit, attached to the cabinets, because that isn't adding heat or blocking air. So I think this is a useful trick, to be used partially instead of whole-unit, sometimes.

And I kept my bulb visor drapes on my minis. Really enjoying not having that bulb glare in my eyes!